The two teams will represent the Committee (past and present) and the Members. The winning team will be presented with the magnificent Leon Friedman Memorial Trophy (aka the Committee Cup).

If you sign up for the match then you will be guaranteed a game as we will juggle the numbers so that there are an equal number of players on each side. We are indebted to Sean Friedman and Mike Warnes for their generous sponsorship of this event . All matches will be played over the full 18 holes: the winning scores in individual matches would only be brought into the reckoning should the overall team match result in a tie.

The sixth annual Committee Cup fixture took place on one of this year’s rare dry days.  Blue skies graced us for many of the holes, but only a few brave souls decided that they did not need jumpers. The delightful New Zealand golf course was in good nick despite some work on the course rebuilding bunkers and increasing drainage on the 8th green (leading to the only temporary green)

There were 26  players in all but, to balance up the teams, some were made honorary members of the Committee team.

All matches (mostly four ball better ball) were played out for the full 18 holes, with an overall tie to be resolved by the number of holes won. The two three-ball matches were played as two singles matches

Lunch was superb and, after a few words from our President, Martin Derrick, Sean Friedman (Members’ Captain) was presented with the magnificent Leon Friedman Memorial Trophy by our guest of honour, Mrs Bernice Friedman,

·       We are extremely grateful to Sean Friedman his continued sponsorship of this event and for his mother, Bernice, for being today’s Guest of Honour

·       Welcome to two new members, Steve Burge and Ian Dowdeswell, who are joining us today for their first MTGS event.

·       The next event on our schedule is the first major of 2020 – the Members’ Day at St Georges Hill on April 2nd. Please attend the AGM that day if you possibly can – we welcome your feedback. This year we will be welcoming Nick Haigh as our new President with the ceremonial Drive-In (Injuries allowing). 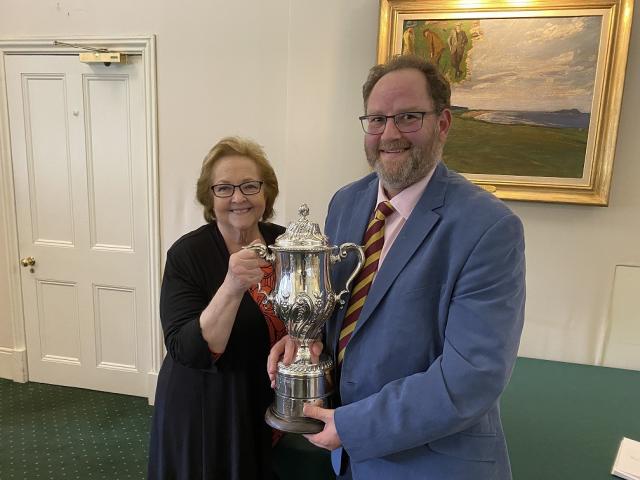