It is with a heavy heart that I feel I must start by reporting the sad news that Geoffrey Dale passed away on Tuesday last week. He was on this way home from playing golf and it is thought that he suffered a heart attack. Geoffrey was very well known in our industry and was an MTGS member for many years. He was due to play at the Blackwell match. We will let the membership know as soon as we have details of the funeral. Our thoughts are with his family at this tragic time.

It was a beautiful autumn day at Blackwell and 15 MTGS members were around the 1st tee ready to do battle with the members of the MTGS North West. I was playing with James Crickmay against Stan (their President) and a young 5 handicapper called Phil – I thought we were in for trouble! Phil hit his drive on the 1st so far that we never found the ball but we still only halved the hole! With a good first 9 from me and with James taking over on the back 9 James and I won 4 and 3. I then thought, oh dear, so far this year when I win the society loses – have we got it wrong.

Both teams congregated (with liquid refreshments) behind the 18th green to watch the matches come in. It soon became very plain that it was not to be a good day for the Society! Godfrey and Stan were the only other winners, making the score 6/2 to the North West. Neil Smith said we hadn't lost the trophy as we didn't have it at the moment! Looking at the trophy I saw that the overall score was 5 ½ - 7 ½ to us!

My thanks go to Gerry Lynch for a super job as Match Manager.

Before grace at Dinner a few moments silence was held while we thought about the passing of Geoffrey. 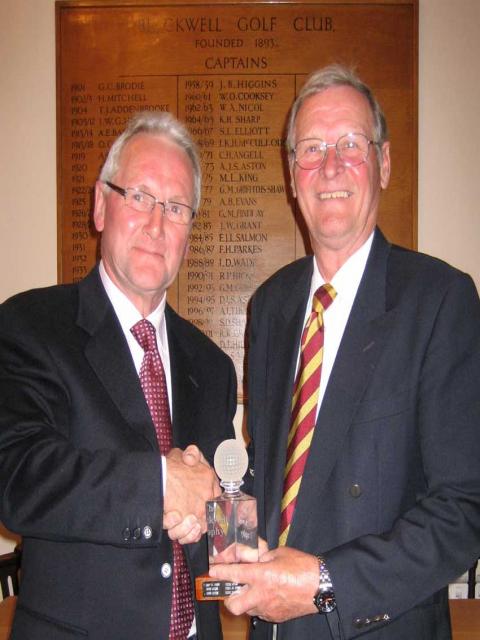 I hand the Blackwell Trophy to Stan