Thur 3 Sept was surprisingly fine – earlier this week the forecast was terrible! I have not yet this year played in a wet MTGS fixture (with 5 more games left to play is this a wise thing to say!) However 30+ players turned up at Walton to play for some 20 prizes and Trophy's!

It was the last Members meeting for 2009 and the Aggregate Trophy's were to be presented (to remind you the Aggregate Trophy's are for the best scores from 3 of the 5 members meetings split between Overall, Div's 1 and 2 and Seniors). John Lindblom and John Etches were on hand to man the desk – our thanks go to them for their help, I am sure John L will not mind me saying that we were told that he celebrated his 80th birthday this year (I hope I will be as good as John when and if I make 80!)

However back to the golf, the day was fine but it was difficult to stand up at times with the strong wind, and to stand still when putting was almost impossible! As you will see below some members managed some good scores. The Walton Heath courses were as good as ever, although a few members thought the green were a bit slow – I agree that upwind they were a bit slow but downwind…….

There were some amusing reports on the days golf from some members – One member who was among the winners said "I only hit 2 fairways all day – well that is for the holes I was playing" another said "I hit a huge drive on the Longest Drive hole – shame it was not my division!"

At the prize giving it was nice to see Ron Young who had come to give his support to the winners. 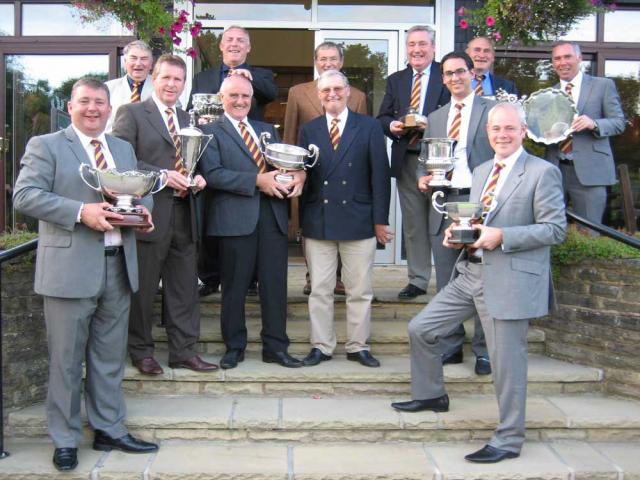